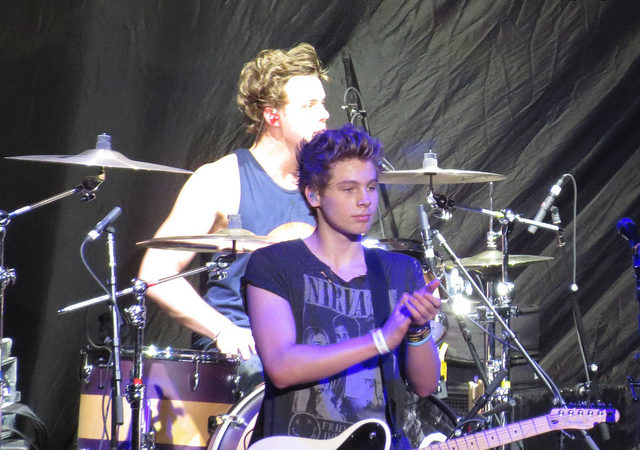 I wanted to use todays song and group because the bands name reflects to me how I feel this year, here where I live LOL. We just got back from going upstaate for the weekend and to attend our annual Blues Festival in Norwich that we have been going to for the last 6 years and there are hints of fall all over on the drive there.

This is a new group to me ( I recently saw them on Jimmy Kimmel) and heard one of their songs going upstate on the indy-rock station. I do like them and this song alot. I wasn’t able to retrieve the full lyrics because of my dial up but that’s okay the ones I did get will get you the answer.

The group is an Australian pop punk and pop rock band formed in Sydney in 2011. Some of the members members were originally YouTube celebrities, who posted videos of themselves covering songs from various artists in 2011. From there, they started to gain a small following in 2012 after posting a series of cover versions of popular songs onto YouTube, then rose to international fame when One Direction invited them on their Take Me Home Tour.

They have been called a boy band by the media. Members of the band have said the group is not a boy band. Unlike many boy bands, they write their own songs, play their own instruments, and they are not primarily a dance group. Nevertheless, the band has attracted a fanatical following of girls just like other boy bands.

They cite Blink-182, All Time Low, Green Day, Mayday Parade, Boys Like Girls and Busted as their influences.

I drove by all the places we used to hang out

5 Seconds of Summer – Amnesia was presented by Cheryl on 18th August 2014.