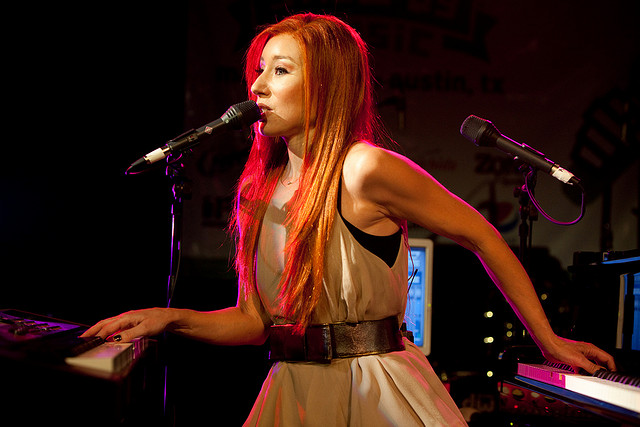 The Mystery Artist is an American singer-songwriter, pianist and composer. She is a classically trained musician and possesses a mezzo-soprano vocal range. She has been nominated eight times for a Grammy Award.

Having already begun composing instrumental pieces on piano, she won a full scholarship to the Peabody Institute at Johns Hopkins University, the youngest person ever to have been admitted, at age five. She was expelled at age eleven for, in her own words, insisting on playing by ear and because of her interest in popular rock music. She has become one of the world’s most prominent female singer-songwriters whose songs have discussed a broad range of topics from sexuality, feminism and religion . She was also noteworthy early in her solo career as one of the few alternative rock performers to use a piano as her primary instrument. Some of her charting singles include “Crucify”, “Silent All These Years”, “God”, “Cornflake Girl”, “Caught a Lite Sneeze”, “Professional Widow”, “Spark”, “1000 Oceans”, “Flavor”, and “A Sorta Fairytale”, her most commercially successful single in the U.S. to date.She has sold more than 12 million albums worldwide. She has been nominated for and won several awards in different genres, ranging from MTV VMAs to classical music with an Echo award in 2012.

I am not your Senorita
I am not from your tribe