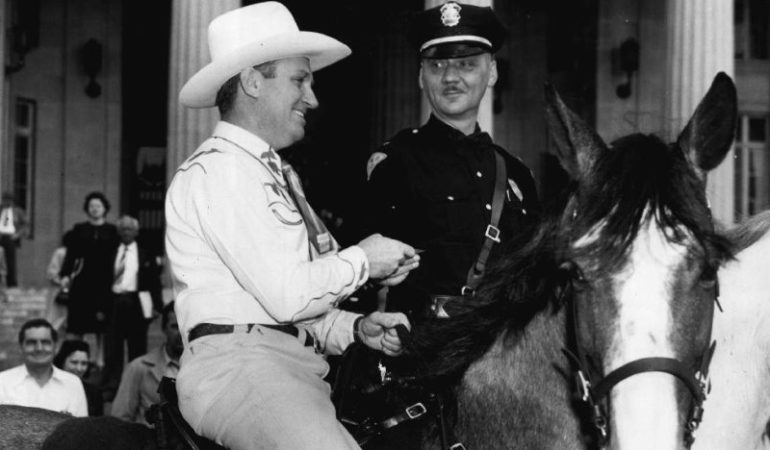 The Mystery Artist was an American performer who gained fame as a singing cowboy on the radio, in movies, and on television for more than three decades beginning in the early 1930s. He was also owner of a television station, several radio stations in Southern California, and the Los Angeles/California/Anaheim Angels Major League Baseball team from 1961 to 1997.

From 1934 to 1953, he appeared in 93 films and 91 episodes of his television series. During the 1930s and 1940s, he personified the straight-shooting hero—honest, brave, and true—and profoundly touched the lives of millions of Americans.He was also one of the most important figures in the history of country music, considered the second major influential artist of the genre’s development after Jimmie Rodgers.His singing cowboy movies were the first vehicle to carry country music to a national audience. In addition to his signature song, “Back in the Saddle Again”, he is still remembered for his Christmas holiday songs, “Here Comes Santa Claus”, which he wrote, “Frosty the Snowman”, and his biggest hit, “Rudolph the Red-Nosed Reindeer”.

He is a member of both the Country Music Hall of Fame and Nashville Songwriters Hall of Fame, and is the only person to be awarded stars in all five categories on the Hollywood Walk of Fame, for film, television, music, radio, and live performance.

A song recorded by many and best known for the 1956 Fats Domino hit was actually introduced by the Mystery Artist in a western called The Singing Hill in 1940 and this is the original recording.

Your mystery lyric was:

The wind in the willow played love’s sweet melody