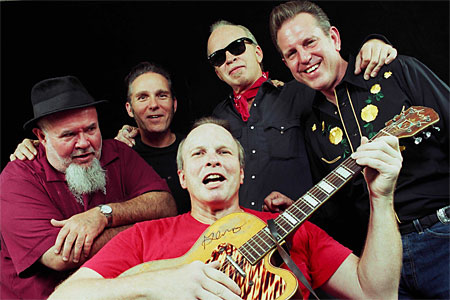 Today’s artists are a rock and roll band formed in 1979 in Downey, California, by brothers Phil Alvin (vocals and guitar) and Dave Alvin (guitar). with bassist John Bazz and drummer Bill Bateman. Phil Alvin explained the origin of the band’s name: “I thought Joe Turner’s backup band on Atlantic records – I had these 78s… That ends up it was Jimmy McCracklin…Joe finally told me, that’s Jimmy McCracklin’s name, but you tell ‘im I gave you permission to steal it.”

Their self-described “American Music” was a blend of blues, rockabilly, early rock and roll, punk rock, mountain music, and rhythm and blues. They have a devoted fan base and have received largely positive critical reviews, but have earned only limited mainstream success. Critic Mark Deming wrote of them, “displayed a wide-ranging musical diversity [and] were a supremely tight and tasteful band with enough fire, smarts, and passion for two or three groups.”

Former Black Flag singer and current Rollins Band leader Henry Rollins wrote of them, “In my mind, they were a great band that not enough people found out about. Bill Bateman is one of the best drummers there is, and then of course, there are the Alvin brothers. A lot of talent for one band.”

“You stood on the steps, wearing your best…”

The Blasters – Red Rose was presented by Diana on August 8th 2014.