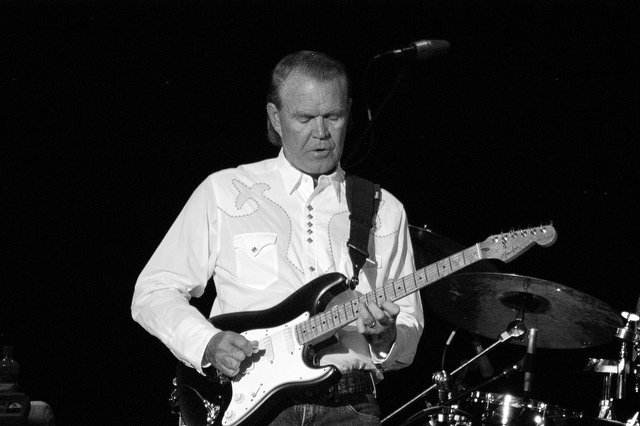 Glen Travis Campbell (born April 22, 1936) is an American country music singer, guitarist, television host, and occasional actor. He is best known for a series of hits in the 1960s and 1970s, as well as for hosting a variety show called The Glen Campbell Goodtime Hour on CBS television.

During his 50 years in show business, Campbell has released more than 70 albums. He has sold 45 million records and accumulated 12 RIAA Gold albums, 4 Platinum albums and 1 Double-Platinum album. Campbell’s hits include John Hartford’s “Gentle on My Mind”, Jimmy Webb’s “By The Time I Get to Phoenix”, “Wichita Lineman”, and “Galveston”, Larry Weiss’s “Rhinestone Cowboy”, and Allen Toussaint’s “Southern Nights”.

Campbell made history by winning four Grammys in both country and pop categories in 1967. For “Gentle on My Mind” he received two awards in country & western, “By the Time I Get to Phoenix” did the same in pop. He owns trophies for Male Vocalist of the Year from both the Country Music Association (CMA) and the Academy of Country Music (ACM), and took the CMA’s top award as 1968 Entertainer of the Year.

In 1969 Campbell was picked by actor John Wayne to play alongside him in the film True Grit, which gave Campbell a Golden Globe nomination for Most Promising Newcomer. Campbell sang the title song which was nominated for an Academy Award.

“Galveston” is a song written by Jimmy Webb and popularized by American country music singer Glen Campbell. In 2003, this song ranked number 8 in CMT’s 100 Greatest Songs in Country Music. Glen Campbell’s version of the song also made number 4 on the Billboard Hot 100 and number 1 on the country music and “Easy Listening” charts. It was certified gold by the RIAA in October 1969.

Since we are saluting Sev this week, I thought it would only be appropriate to include today’s song. Sev was a proud veteran who served in the Vietnam War. The song was written by the amazing Jimmy Webb and recorded by Glen Campbell. It became a hit, echoing the thoughts, feelings, longings, and fears of many soldiers during that time. The song was perceived as an anti-Vietnam protest song but Campbell performed it up-tempo, conveying a more general message. The protagonist is a soldier, as shown in the original promo video with Campbell dressed up in a military outfit. Webb described it as an anti-war song, and challenged Campbell’s version of his song and the notion that it was in any way a “patriotic song”.
Diana

The song describes a soldier waiting to go into battle who thinks of the woman he loves and his hometown of Galveston, Texas. The song was originally sung by Don Ho and the second verse was “Wonder if she could forget me, I’d go home if they would let me, put down this gun and go to Galveston” but was changed to “I still hear your sea waves crashing/as I watch the cannons flashing/I clean my gun/And dream of Galveston.”

The song is considered as the official anthem of Galveston Island and the City of Galveston, Texas.

Glen Campbell – Galveston was presented as a “floater” by Diana on July 4th 2014.
Texts from Wikipedia released under a creative commons license
photo credit: Chris Boland via photopin cc