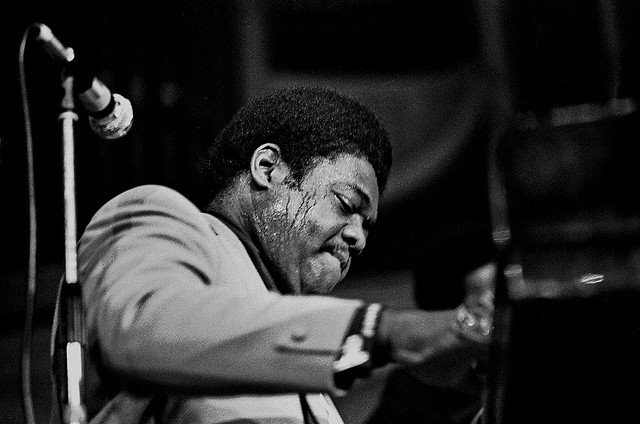 The Mystery Artist (born February 26, 1928) is an American rhythm and blues and rock and roll pianist and singer-songwriter. He released five gold (million-copy-selling) records before 1955. He also had 35 Top 40 American hits and has a music style based on traditional rhythm and blues ensembles of bass, piano, electric guitar, drums, and saxophone.
He first attracted national attention with “The Fat Man” in 1950 on Imperial Records. This song is an early rock and roll record, featuring a rolling piano and the artist doing “wah-wah” vocalizing over a strong back beat. “The Fat Man” sold one million copies by 1953.He released a series of hit songs with producer and co-writer Dave Bartholomew, saxophonists Herbert Hardesty and Alvin “Red” Tyler and drummers Earl Palmer and Smokey Johnson.He finally crossed into the pop mainstream with “Ain’t That A Shame” (1955), which hit the Top Ten, though Pat Boone characteristically hit No. 1 with a milder cover of the songthat received wider radio airplay in a racially-segregated era. The artist eventually had 37 Top 40 singles.