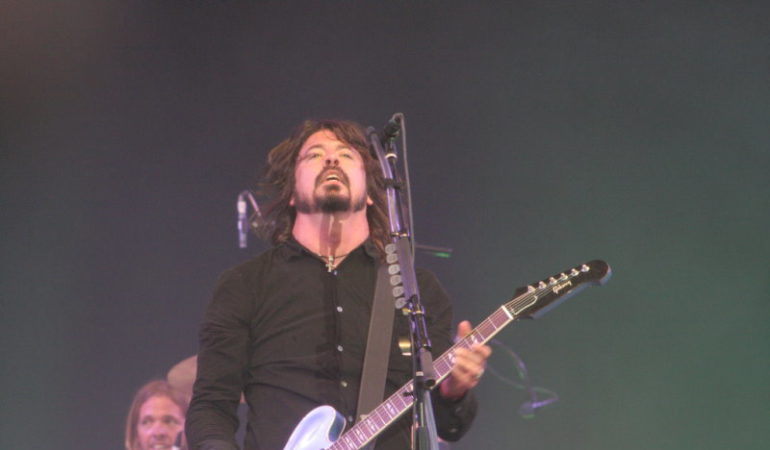 Hello. I’ll try hard not to gush about tonights band. They have been my favorite modern rock band, since their inception. They were created out of the ashes of a grunge band who lost their front man to suicide in 1994.

Their lead singer went from drummer in his old band, to rhythm and lead guitar and vocals in this band he created. Their music ranges from melodic to heavy guitar/drum driven, their songs range from humorous, to dark, and their videos are always entertaining – for me, that just adds to their appeal.

The band started as a one man project in 1995. The front man then recruited bassist Nate Mendel and drummer William Goldsmith, both formerly of Sunny Day Real Estate, as well as former touring band mate Pat Smear as lead guitar, to complete the lineup. Goldsmith quit during the recording of their second album, “The color and shape”, (1997) when the leadman re-recorded most of the drum parts himself. Smears departure followed soon after. Goldsmith was replaced by Tyler Hawkins, Smear was ultimately replaced by Chris Shifflet (although Smear has been touring with the band since 2006).

Four of the bands albums have won Grammys for Best Rock Album, 7 other Grammys (11 in total) and several other awards for videos and music. The band is well respected among Rock and Rollers, and the music community, in general.

Tonights hard driving song is from their 2007 album “Echoes, Silence, Patience and Grace”, shares a name with a Jackson Browne song, and apparently, Gene Simmons hasn’t heard them.

The need you buried deep, The secrets that you keep are ever ready, Are you ready?

I’m sorta like Gene Simmons. The Foo Fighters have passed me by without me really taking notice of them, except for knowing that they are a great favourite of my sister. I’m sure she’ll love this one. and if I’m honest, this version at least, is well worth listening to … Dave

Please rate the music, not the presentation. No registration needed, just a simple click on the number of stars you wish to give. If you want to rate and review the music as above, please scroll down to the comments section, where you can add your review and your rating together.