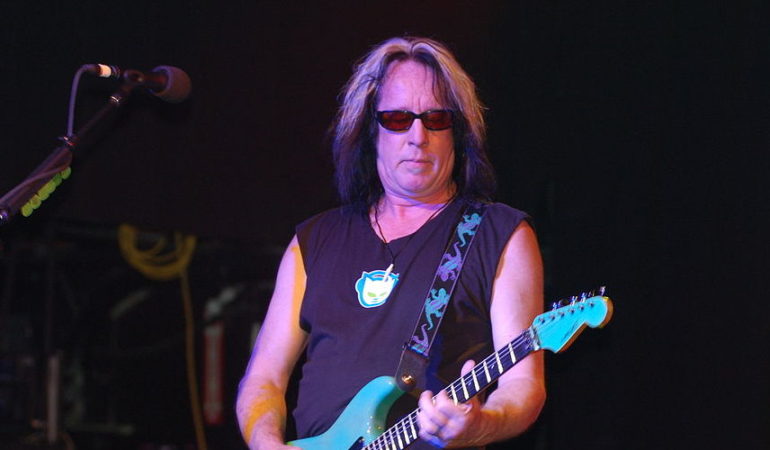 Editors note: A good few years ago in 2006 I started a blog called “Mystery Lyrics Gold” which allowed readers to sign up and write their own blog posts. A week or so ago I came across this long forgotten blog system a decided to transfer some of the posts to My Music Movement.

Anyone who knows Diana, will know of her love for Todd Rundgren. Only fitting then that she should write about his music on this blog platform. Under the title of “A Tribute Page of Tribute LPs” she wrote posts about songs by her favorite artists that were covered by others – starting of course with Todd Rundgren.

My friends used to tease me that if I ever owned a radio station, its call letters would be KTOD. Or that I would someday be a fat old lady with lots of cats and vanity license plates that read “NAZZ“, “UTOPIA“, or “RUNT.” I have been a big Todd Rundgren fan since I was a teenager; but I was soooooo disappointed in rock radio programmers, as they never seemed to pick the really good songs to play. I was the true purveyor of good taste, as I could pick a good rock song. Apparently, so can these artists…

Mitch Easter – International Feel – Mitch’s claim to fame will probably always be that he was the recording engineer for early REM works, but this points ol’ Mitch out as man of some discrimination when it comes to choosing material as the song is an obscure gem laden with falsetto vocals and keyboards.

Viral Satellite – Long Flowing Robe – Speaking of obscure gems…this one is a definite favorite of mine, as it shows off Rundgren’s pop prowess, and the band had me dancing in my chair as I listened over and over while working on this review, right down to the little acapella bit at the end.

Ben McMurtrie – Healer – This eastern-influenced new-age romp makes the heart soar and McMurtrie is faithful to the original in so many ways it’s astounding.

Jaime Hoover – Izzat Love – “In the end, who’s your friend? Just myself…” Ahhh….

Greg Jennings – The Fire Of The Mind – A nice little instrumental study break.

Rocket Scientists – Too Far Gone – The “followup” from Rundgren’s Hermit of Mink Hollow that I liked better than the HIT “Can We Still Be Friends”. This version again shows off Todd’s songwriting and timing. While his original features various electronica, this cover also brings in acoustic elements and some wonderful phrasing.

The Guild – Couldn’t I Just Tell Ya – Before I bought this CD for myself, a friend played it for me, but I don’t remember hearing this song (and I am thankful). “Couldn’t I Just Tell You” was one of my favorite dance songs in the 1970’s, and was clearly a star of the Something/Anything sessions. Every time I have heard a band cover this song, they have done so reverently and I was never disappointed. Such was not the case this time – this version sounds like an alcohol-drenched follow-up to “Love Hurts” on Hair of The Dog. BTW, one of the best covers I’ve ever heard was performed by the band Semisonic, kicking off an encore set at Cicero’s in St. Louis, Missouri.

Mitch Cooper – Hello, It’s Me – No Rundgren tribute would be complete without a cover of this song. This song pretty much reminds everyone of being young and going to summer concerts. It was a good song when Nazz did it, when Todd did it solo, and Cooper does it well, too.

Fred Froom – Pretending To Care – An interesting choice from the Acapella LP. This was always the palate cleanser that sat smack between “Johnee Jingo” and “Hodja”, but hearing it alone shows what a beautiful song it is, especially this one.

Parthenon Huxley – There Goes My Inspiration – A nice piece of pop perfection from the same Utopia album that yielded “Hammer In My Heart” for the MTV crowd. This cover shows off some great harmonies.

Van Cooper – Torch Song – If you put a gun to my head and demanded that I name my favorite Todd Rundgren song, it would more than likely be this song. I never thought I’d hear vocals as perfectly imperfect as Todd’s on this song, but Van Cooper’s damned close.

David Melbye – The Wheel – This great song always reminds me of riding with strangers who became my friends from Kansas City to Chicago to see Todd at Park West in Chicago on New Year’s Eve 1987. One of them had brought a Back To The Bars cassette and we must have listened to “The Wheel” hundreds of times. Melbye’s melodic version kicks me into full-blown nostaligia and plasters a smile to my face.

Kenny Collins – Cliche – A lovely song that speaks of romance and the human condition. Collins’ vocals give this cover a certain uncertain charm; guitar and piano lend an almost harp-like accompaniment.

The Woods – Slut – A song I’ve always been convinced that every bar band should have in their arsenal. The opening chords sound like the inside of a strip club, and the guitar solo is perfect 70’s sleaze, “She’s got saggy thighs and baggy eyes, but she loves me in a way that I can still recognize…”

Nate Kennerly – Love Of The Common Man – This song has forever brought out the idealist in me. This cover reminds me of TR shows when the band took a break and went backstage to change and rehydrate while Todd rolled up his sleeves and stepped up to the mic with an acoustic guitar, “Turn the world around, too late tomorrow…”

Bill Lloyd – I Don’t Want To Tie You Down – I would have never thunk that Bill Lloyd would make this inspired choice from A Wizard, A True Star. I could imagine Bill and Radney Foster performing some of the more rollicking material from this LP, but this song shows off Bill’s ability for passionate delivery quite nicely.

Secret Society – Hideaway – It’s great that the artist name is the title of a great Utopia song from the album POV. What can I say? I love, love, love this song! From The Ever-Popular Tortured Artist Effect, it has always spoken to lost soul inside me and I think it would take someone deliberately setting out to destroy it for me to not like this ‘un. It ain’t happenin’ here, either.