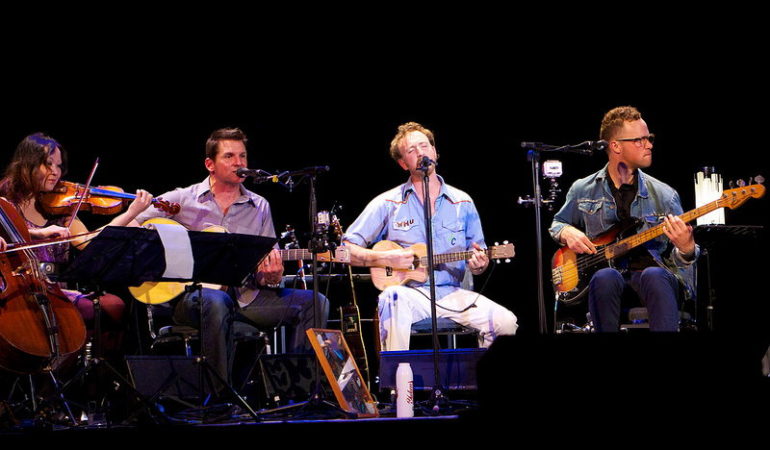 Although they evolved into a full-fledged pop band, our Mystery Band began their career as a quirky acoustic trio. The band, whose three co-founders met during freshmen year at Tufts University, spent most of the 1990s touring the college circuit and releasing independent albums, all of which featured hand percussion in lieu of a traditional drum set. Released in 1999, Lost and Gone Forever widened the band’s sound considerably, and the follow-up album found percussionist Brian Rosenworcel playing a drum set on several songs. Multi-instrumentalist Joe Pisapia joined the lineup in 2003, allowing the band more freedom to explore a combination of folk, pop, and rock.

Tonights song is from their 1999 release, Lost and gone forever, and is featured in a key scene in one of my favorite movies. It’s a poignant story about a troubled teenage boy and his neglectful father. The father takes his son for a summer, to have the boy help him build his modest dream home after finding out that he (the father) is terminally ill. What they discover about themselves and each other during the building process, makes for a beautiful story line. Name the movie for bonus points. Mary Ruth

They formed in 1991, when Ryan Miller, Adam Gardner, and Brian Rosenworcel first crossed paths at college orientation. The trio played local shows around the Boston area before releasing an independent album, Parachute, in 1994. By 1996, they’d recorded a second album Goldfly, which netted the band a contract with Sire Records. Sire reissued Goldfly in 1998, and the bandmates decamped to a recording studio later that year to work with producer Steve Lillywhite. Released in 1999, Long and Gone Forever became the band’s unofficial breakthrough album, cracking the lower reaches of the Billboard charts and spinning off a hit single, “Fa Fa,” which peaked at number 26 on the Adult Top 40.

I will just play dumb, I won’t hear a single word that’s said, I will bite my tongue