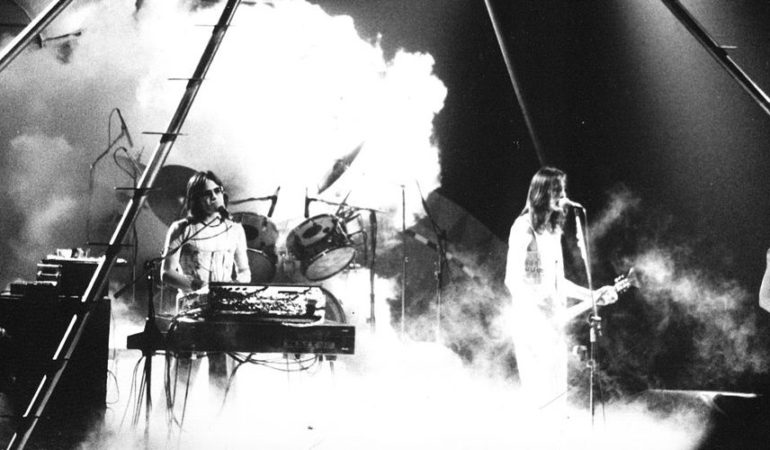 When the soldier returns from the wars, even though he has white hair, he very soon finds a young wife. But a woman has only one summer; if she does not make hay while the sun shines, no one will afterwards have anything to say to her, and she spends her days consulting oracles that never send her a husband.”

“We must refrain from the male altogether…. Nay, why do you turn your backs on me? Where are you going? So, you bite your lips,and shake your heads, eh? Why these pale, sad looks? why these tears? Come, will you do it-yes or no? Do you hesitate?”

Lysistrata, open up the bedroom door
What is the matter, ain’t you in love with me no more?
I enlisted in the army today,
One more time before I march away
Make me feel like a big strong man
You say you don’t care about my pride,
You love me too much just to let me die,
And you won’t let me come inside
Unless I don’t go to war no more

Lysistrata, little boys like to have their fun,
And you know I gotta put on my colors and get my gun
Every able bodied man that I know,
Every patriot is packed to go
Won’t you give me a last goodbye
I’ll be sent off to a distant land,
To spill my blood upon some foreign sand,
And I may die by an enemy’s hand
And then I won’t go to war no more

“Lysistrata” was released on the Utopia album Swing To The Right – a release that is part sarcastic social commentary and part hopeful plea for the world. Many of the songs reflect attitudes about the Reagan era, but a dyed-in-the-wool conservative can’t find the message completely obnoxious or arrogant, even though they sometimes comment on money and greed in society or moral flexibility in the recording idustry. Left to stand alone, the songs themselves are good, especially “Lysistrata”.

Aristophanes was a genius of Greek comedy. He firmly believed that one could drive home a good point by making the audience laugh. They had to think to laugh, yes? And no one could more fully develop a good comedy than he, using not just a masked chorus, but the scenery and its machinery as well as the dialogue and the style revealed therein. It was said that his comedies borrowed much from tragedy but, “retained the Phallic abandonment of the old rural festivals, the license of word and gesture, and the audacious directness of personal investive.”

Aristophanes was not alone in these charateristics; he borrowed from many of the older comic poets who could be called his mentors. By giving himself a free hand with the bold practical jokes and a wink at bawdy humor, he had honed his art towards a heady refinement to which he boasted no peers to his noble wit. His opinions, however conservative, were never far from a surface frothy with very effective political satire. His critics were quick to point out that he was neither accurate nor impartial, but he was certainly a patriot. He genuinely loved Athens, and this love meant he had the right to point out things that could be improved and to work for its improvement, something that modern-day patriots could learn from in our “love it or leave it” society. Like any great comic poet, Aristophanes could find wit at the expense of himself or his friends, willing to be educated by his times. The ability to create lyric beauty ranks him amongst the best of the poets.

His critics called him, “an unmannerly buffoon,” which was probably one of his many faults. At times, Aristophanes felt it necessary to stoop to conquer, his work seemed coarse in order to appeal to the general populace. But even this indecent buffoonery brought such power to his work, and told truths to the people. He said that it merely brought his art to perfection and that he did not court the laughter of the multitudes. His predecessors certainly held themselves to a higher moral ground than did Aristophanes, and when viewed by the patrician tenents that ruled the arts later, his work was no doubt offensive. In respect to the the times, the free hand he used was perfectly appropriate.

One is reminded of a scene in the film “Amadeus” in which Mozart lectures his benefactor on the works of previous composers, saying their operas make it seem as though they “shit marble.” When his audience is shocked, he remarks, “Forgive me, Majesty. I am a vulgar man! But I assure you, my music is not.” The same could be said of Aristophanes.

In Praise Of Aristophanes:

The strongest testimony in favor of Aristophanes is that of Plato, who, in one of his epigrams, says that “the Graces chose his soul for their abode.” The philosopher was a constant reader of the comedian, sending to Dionysius the elder a copy of the Clouds, from which to make himself acquainted with the Athenian republic. This was not intended merely as a description of the unbridled democratic freedom then prevailing at Athens, but as an example of the poet’s thorough knowledge of the world, and of the political conditions of what was then the world’s metropolis.

In his Symposium, Plato makes Aristophanes deliver a discourse on love, which the latter explains in a sensual manner, but with remarkable originality. At the end of the banquet, Aristodemus, who was one of the guests, fell asleep, “and, as the nights were long, took a good rest. When he was awakened, toward daybreak, by the crowing of cocks, the others were also asleep or had gone away, and there remained awake only Aristophanes, Agathon, and Socrates, who were drinking out of a large goblet that was passed around, while Socrates was discoursing to them. Aristodemus did not hear all the discourse, for he was only half awake; but he remembered Socrates insisting to the other two that the genius of comedy was the same as that of tragedy, and that the writer of the one should also be a writer of the other. To this they were compelled to assent, being sleepy, and not quite understanding what he meant. And first Aristophanes fell asleep, and then, when the day was dawning, Agathon.” – Wikipedia, Divine Comedy

“However corrupt and vulgar Aristophanes may have been, however much he may offend decency and taste in his individual jests, yet we cannot refuse him the praise of the carefulness and masterly skill of the finished artist. His language is infinitely graceful; the purest Atticism prevails in it, and he adapts it with great skill to all tones, from the most familiar dialogue to the lofty flight of the dithyrambic ode. We cannot doubt that he would have also succeeded in more serious poetry, when we see how at times he lavishes it, merely to annihilate its impression immediately afterward. This elegance is rendered the more attractive by contrast, since on the one hand he admist the rudest expressions of the people, the dialects, and even the mutilated Greek of barbarians, while on the other, the same arbitrary caprice which he brought to his views of universal nature and the human world, he also applies to language, and by composition, by allusion and personal names, or imitation of sound, forms the strangest words imaginable. His versification is not less artificial than that of the tragedians; he uses the same forms, but otherwise modified, as his personages are not to be impressive and dignified, but of a light and varied character; yet with all this seeming irregularity he observes the laws of metre no less strictly than the tragic poets do.” – Temple Classics

In praise of Todd Rundgren & Utopia:

“Then I was afforded a listen by my friendly neighborhood record store clerk…I liked it immediately, but I was never a big fan of Todd Rundren before this. “Lysistrata” is a personal favorite, ’cause that’s actually what is sorta what’s happenin’, but no one’s had the…uh…chutzpah to say it…Listening to this now makes one realize that things have not changed that much from them Reagan years, the game’s the same but the faces have changed…also, do we have anybody besides these boys and Joanie Baez to lay it on the line and tell the people the real deal?” – Amazon/CDNOW Review

“I didn’t realize when I was in high school how these songs would follow me in life. Brilliant; atypical Todd Rundgren… A sleeper in the best sense. You should have this in your CD collection. A precursor to bands such as BNL and Phish, Utopia’s sense and sendiments can be shared and felt by all who listen.” – Amazon Review

“Lysistrata” is worth the album price alone.” – Prog Archives

“Lysistrata” is certainly another great tune. A story from Greek mythology about a woman who won’t let her man go off to war; “You love me too much just to let me die.” And she succeeds; “Tell the troops it was a false alarm, ‘Cause if I die I want to be in your arms.”…The content is a heavy focus on social, political, and economic issues of the time. The lyrics are more outwardly focused than other Todd and Utopia albums. Swing is more difficult to digest than some smoother Utopia products such as Adventures and POV. But it contains many strong points and is a solid part of the Utopia catalog. Hear a different sound.” – E.G. Todd Rundgren Connection

Photo: This file is licensed under the Creative Commons Attribution-Share Alike 3.0 Unported license.