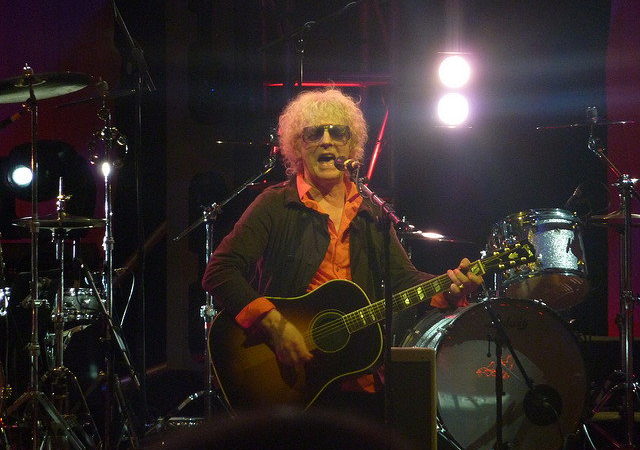 Today we have a Rock-Band from Herefordshire, England, with strong R&B roots. They were popular in the Glam Rock era of the early to mid-1970s. They are probably best known for their Song “All The Young Dudes”, written for them from David Bowie.

Listen woman, you needn’t look so stupid
When I call your name out loud

Mott the Hoople can be traced to two beat bands from Herefordshire in the early 1960s. The Soulents were from Ross-On-Wye, and boasted Pete Overend Watts on guitar, and Dale “Buffin” Griffin on drums. The Buddies were from Hereford, and featured Mick Ralphs on guitar and Stan Tippins on vocals. By 1966, Ralphs, Tippins, and Watts (the latter now on bass) had come together in a band called The Doc Thomas Group, and soon secured a residency at a club in a resort town in Italy. The group was offered a recording contract with the Italian label Dischi Interrecord, and released an eponymous album in January 1967. By 1968, drummer Dale Griffin and organist Verden Allen had joined the band.

Although the group toured and recorded in Italy as The Doc Thomas Group, their gigs in the UK were played under the names of The Shakedown Sound and later, as Silence. Silence recorded demos at Rockfield Studios in Monmouth, Wales, which were shopped to EMI, Polydor, Immediate and Apple with no success. The group came to the attention of Guy Stevens at Island, who liked the group but not with Tippins as lead singer. Advertisements were placed (“Singer wanted, must be image-minded and hungry”), and Ian Hunter was selected as lead singer and piano player. Tippins assumed the role of road manager.

While in prison on a drug offence, Stevens read the Willard Manus novel Mott the Hoople about an eccentric who works in a circus freak show, and decided to use it as a band name. Silence reluctantly agreed to a name change following their early 1969 audition for Stevens.

The band’s debut album, Mott the Hoople (1969), recorded in only a week, was a cult success. Their repertoire included cover versions of “Laugh at Me” (Sonny Bono) and “At the Crossroads” (Doug Sahm’s Sir Douglas Quintet), and an instrumental cover of “You Really Got Me” (The Kinks).

The second album, Mad Shadows (1970), sold poorly and received generally negative reviews. Wildlife (1971) fared even worse, and flirted with an overtly country-hippie stance and accordingly (usually) acoustic instrumentation. On 10 October 1970, Mott the Hoople and Bridget St John were showcased on BBC Two’s Disco 2. Even though the group was building a decent following, Brain Capers (1971) failed to sell well. The group decided to split following a depressing concert in a disused gas holder in Switzerland. When combined with an aborted UK tour with The Lothringers, the band was close to breaking up.

David Bowie had long been a fan of the band. After learning from Watts that they were about to split, he persuaded them to stay together and offered them “Suffragette City” from his then yet-to-be-released Ziggy Stardust album. They turned it down. Bowie also penned “All the Young Dudes” for them and it became their biggest hit. Released as a single in July 1972, it was a success in the UK, with the band using Tippins – who by this time was their tour manager – to sing backing vocals during concert. Bowie produced an album, also called All the Young Dudes, which included a Mick Ronson strings and brass arrangement for “Sea Diver”, sold well but stalled at No. 21 in the UK Albums Chart. Late in 1972 they were going to record another Bowie song, “Drive-In Saturday”, but their intended arrangement did not satisfy him and their professional relationship effectively ended. Another casualty in the wake of All the Young Dudes was Verden Allen, who departed before the release of their next album, Mott.

Mott climbed into the Top 10 of the UK Albums Chart, and became the band’s best seller to date in the US. It yielded two UK hits, “Honaloochie Boogie” and “All the Way from Memphis”, both featuring Andy Mackay of Roxy Music on saxophone. “All the Way From Memphis” is also featured in the movie, Alice Doesn’t Live Here Anymore.

Mott the Hoople’s new-found popularity ultimately helped lead to the band’s break-up, likely exacerbated by an exposé in New Musical Express of Tippins’ role in singing the chorus of “All the Young Dudes”, from a hidden microphone backstage..

Read the whole story on Wikipedia