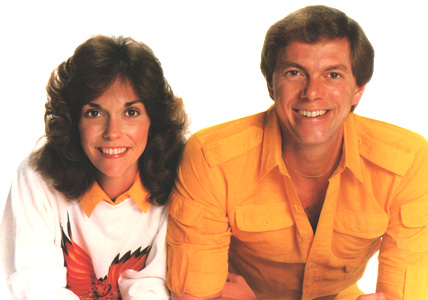 If Mike, Sev and Hil think they have the copyright on “gimmes”, well they have another think coming 🙂

Here goes today with a brother and sister duo that lept to fame in the early 70s, starting their career in 1969 with the LP “Offerings”. During a period in the 1970s when louder and wilder rock was in great demand, they produced a distinctively soft musical style that made them among the best-selling music artists of all time. The female half of the duo died tragically in 1983 from the side effects of anorexia. she was just 32

Todays song from 1972 caused some controversy amongst their fans when it was released, with accusations of them selling out and gone hard-rock, and even some contemporary radio stations refused to play it. The “problem” was a fuzzy guitar solo by Tony Peluso, which ranks in my book as one of the best guitar solos of all time.

From this day love is forgotten, I’ll go on as best I can