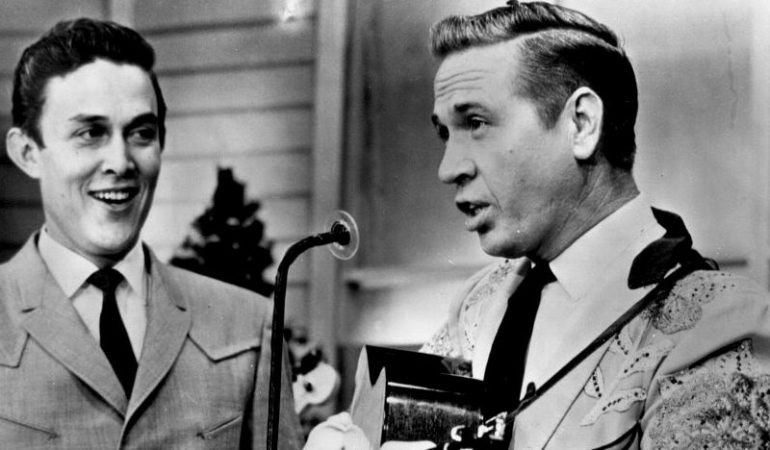 Today’s artist was an American musician, singer and songwriter who had 21 No. 1 hits on the Billboard country music charts with his band. They pioneered what came to be called the Bakersfield sound, a reference to Bakersfield, California, the city he called home and from which he drew inspiration for what he preferred to call American music.

While he originally used fiddle and retained pedal steel guitar into the 1970s, his sound on records and onstage was always more stripped-down and elemental, incorporating elements of rock and roll. His signature style was based on simple storylines, infectious choruses, a twangy electric guitar, an insistent rhythm supplied by a drum track placed forward in the mix, and high two-part harmonies.

Beginning in 1969, he co-hosted the TV series Hee Haw. He left the cast in 1986. The accidental death of his best friend (and band member) in 1974 devastated him for years and abruptly halted his career until he performed with Dwight Yoakam in 1988. He died on March 25, 2006, shortly after performing at his Crystal Palace restaurant, club and museum in Bakersfield.

He is a member of the Country Music Hall of Fame and the Nashville Songwriters Hall of Fame.

Frankenstein was the first in line