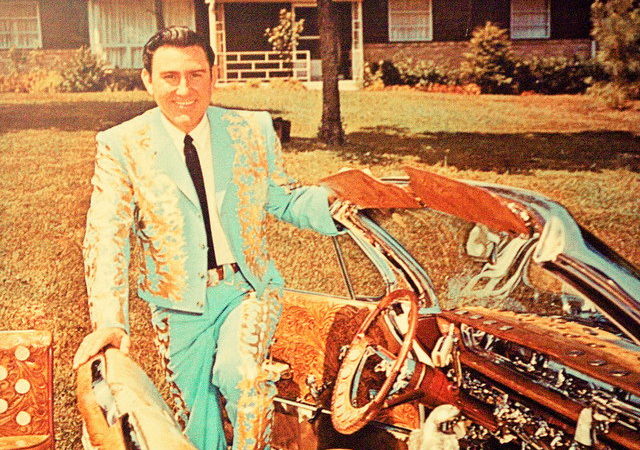 Today’s artist was one of the most popular American honky tonk vocalists of the 1950s, charting more number one hits than any other country artist during the decade.

Back in my carefree younger days, I was invited to tag along with my roommate and her boyfriend to a Fort Worth, Texas honky tonk. I really didn’t think much of the place – it was run down and the regulars all seemed to be truckers, old bikers, and even older cowboys. Once I adjusted, it got to be rather fun. I sang along with songs that were playing by Hank Williams, George Jones, Loretta Lynn, Hank Thompson, Ernest Tubb, etc. Then an older gentleman asked me to dance, and today’s song selection played on the jukebox…
Diana

For many, with his flamboyant Nudie suits and twin silver dollar-lined convertibles, he became the most recognizable face of country music of the era and its excesses. He was a one-time member of the Grand Ole Opry and was posthumously inducted into the Country Music Hall of Fame. A tribute album in his honor was released in 2001, which featured the likes of Willie Nelon, Crystal Gayle, George Jones, Emmylou Harris, Charlie Pride, Allison Moorer, Dwight Yoakam, Pam Tillis, The Jordanaires, and other great artists. Proceeds go to benefit The Minnie Pearl Cancer Foundation.

Footage of him singing “There Stands the Glass” was featured in the 2005 documentary No Direction Home by Martin Scorsese about early influences on Bob Dylan. His hit single “More and More” was played in the title credits of 2006 horror film, The Hills Have Eyes.