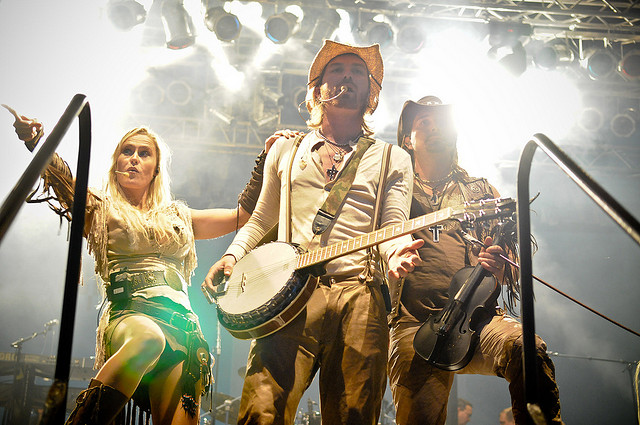 Rednex are a Swedish techno/folk/bluegrass band. They had an international novelty hit with their cover version of the song “Cotton Eye Joe” in 1994. They were very popular in Germany, where the band holds the record of most total weeks (25) at number one on the German singles chart over the past 30 years—scoring such hits as “Old Pop in an Oak”, todays song “The Spirit of the Hawk” and “Wish You Were Here”.

Rednex usually record their songs with studio musicians, to complement the redneck performers who represent the group on stage and in music videos. As of 2013 there have been 23 different stage performers, based on two continents. Though most of them are not involved in the actual music making, they are responsible for the Rednex image and live shows as a whole, and thus are considered as much part of the group as the actual musicians.

Unfortunately in our lifetime we will all face the inevitable….. the loss of a loved one – be it a parent, grandparent, sibling, child, family member, close friend, significant other or even a family pet. The death of that loved one has got to be one of the most powerful events that we will face in our lifetime. I also believe that almost everyone who has ever lost someone they really loved will remember them through the power of music – by a song that relates to a memorable experience in their life – a moment that is frozen in time. Everyone has there own personal way of coping with grief and it varies from person to person.
In the next two days I’ll be dedicating two songs to Sev. Todays song will be a floater as my Sundays are.
Cheryl

“The Spirit of the Hawk” is a country-dance song by the Swedish band Rednex, released from their second album, “Farm Out”. The lyrics include the spoken lines “My people, some of them, have run away to the hills, and have no shelter, no food. No one knows where they are. Hear me, my chiefs! I am tired; my heart is sick and sad. I will fight no more,” taken from Chief Joseph’s famous speech.

Rednex – Spirit Of The Hawk was presented by Cheryl on July 6th 2014
Texts taken or adapted from Wikipedia
photo credit: qnibert00 via photopin cc