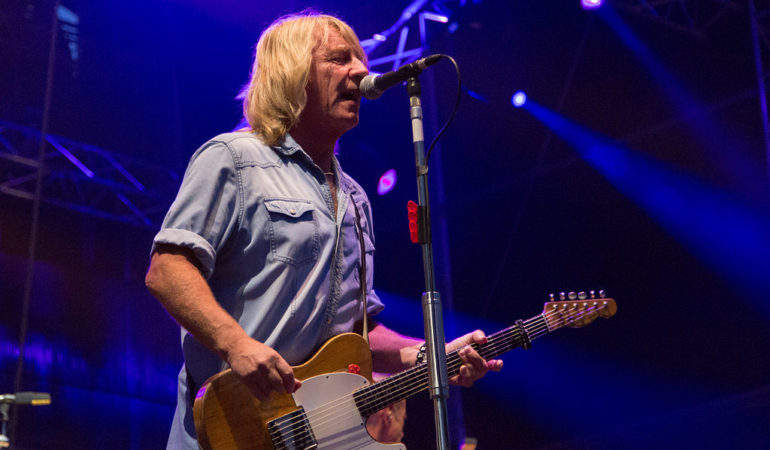 2016 is staying true to itself right through to the bitter end. On Christmas Eve Rick Parfitt of Status Quo passed away at the age of 68 due to an infection incurred after an operation to his shoulder. It was somewhat ironic that he should pass away in this manner after surviving three heart attacks.

Parfitt was one of the originals who never lost his joy, his mischievous edge and his penchant for living life at high speed, high volume, high risk. Francis Rossi

Status Quo influenced me massively in the 1970s. In a five year period from “Piledriver” in 1972 up to “Blue For You” and the subsequent “Live” in 1977 they reeased a number of albums that certainly kept me occupied musically.

Two gigs stand out in my memory

In 1971 I was starting to get seriously interested in rock music after hearing Slade’s “Get Down And Get With It” while on holiday in Withernsea. And the first time they came round to my area, I decided that this was a gig not to be missed. So at the tender age of 14 I attended my first concert at St. Georges Hall in Bradford on 10th May 1972. Special guest was a band I had never hear of: Status Quo. and they blew me away, as did Slade. Back in the day it was very difficult for any band to support Slade, as they were on their way to the top. But so were Quo!!

My father was our chauffeur on that day, and forever afterwards he would tell the story of how he was confronted by this “racket” – as he called it, after arriving a little early before the concert had finished. Apparently he started chatting to the doorman, who asked him if he had ever heard such rubbish. Upon which he opened the doors and my dad caught a glimpse of thousands of teenagers “jumping up and down and waving their hands all over”. My poor dad, he could never understand that music (as I don’t understand todays hip-hop. In that respect we were just the same).

Back end of 1976 I left my home and went to Hamburg in Germany – supposedly for twelve months. After I had been there for a few months Status Quo announced their European Tour. Unfortunately there wasn’t a Hamburg gig, so I had to travel to Kiel on the train, about 80 miles. I remember paying 20 Deutsche Marks for the hotel and having a great time at the concert in the Ostseehalle on 1. March 1977.

Shortly afterwards the famous Double Live Album came out after which unfortunately the band began to change. Their next album “Rocking All Over The World” lacked the sheer energy and pace of the predecessors, but was still a good album. In 1982 Peter Kircher replaced John Coghlan on drums and I lost the band. John Edwards followed on 1985, replacing bassist Alan Lancaster.

Status Quo have survived up to the time of writing, but their sell by date has long expired in my eyes… But at least we have memories of better times.