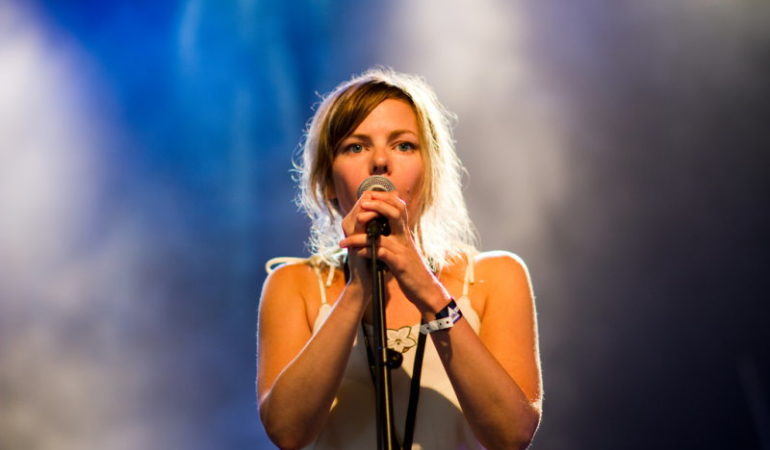 Allmusic.com says this about today’s band:

One of the many accomplished indie pop bands in Sweden in the 2000s, [they] make beautifully wistful, hazy music along the lines of the Go-Betweens, Belle & Sebastian, and the Magnetic Fields — all of whom the band cites as influences… [They] formed in fall 2003, when guitarist/songwriter Joachim Läckberg, vocalist/guitarist Anna Persson, and guitarist/vocalist Daniel Permbo were all studying in the town of Skövde; after getting together for an impromptu recording session one evening, the trio members wrote their first song, “There You Go.” Soon after, bassist Daniel Tolergård joined… and their lineup was complete.

The following spring, the band began playing live… [They] relocated to Gothenburg and issued two self-released CDs and a 7″ on Dolores before signing to Labrador late in 2004. Released in 2005, the Between the Lines EP was their debut release for the label; that spring, [they] signed to AC30 to distribute their music in the U.K., and played their first date in London. Summer 2005 saw the release of their official self-titled debut album, along with more touring in Sweden and the U.K. In 2006, the Coastal Affairs EP arrived; one of its songs, “Kate,” was featured in a commercial for Payless Shoes in the U.S. that summer.

According to Wikipedia, the band’s name was taken from a Serge Gainsbourg song. Today’s selection is from their 3rd major label release, issued in 2010.

Get rid of all potential enemies, to reach your final goal

Sambassadeur – Stranded was presented by Andy on August 23rd 2014