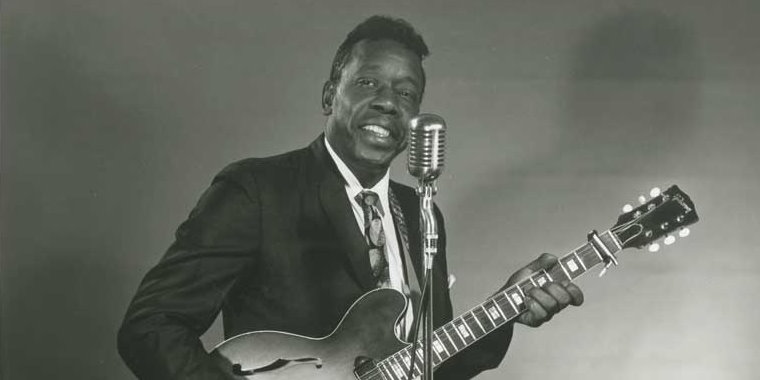 Slim Harpo was presented on Sunday, March 9th 2014 by Diana. Here’s her clue to the Mystery Lyric:

Today’s artist was an American blues musician. He was known as a master of the blues harmonica; the name the popular nickname for the harmonica in blues circles. He started his own recording career in 1957. His solo debut was a Grammy Hall of Fame single.

He recorded under A&R man J.D. “Jay” Miller, in Crowley, Louisianar for Excello Records based in Nashville, Tennessee, and enjoyed a string of popular R&B singles, including Rock & Hall of Fame inductee “Raining In My Heart” (1961) and the number one Billboard R&B hit “Baby Scratch My Back” (1966). On these recordings he was accompanied by the regular stable of Excello musicians, including Lazy Lester.

British rock bands like the Rolling Stones, the Pretty Things, the Yardbirds, the Kinks, Pink Floyd, and Them featured versions of his songs in their early repertoires. Later, the riff from his 1966 hit “Shake Your Hips”, which itself was derivative o Bo Diddley’s “Bring It to Jerome”, was used in the ZZ Top hit “La Grange”, and the Rolling Stones covered the song on their 1972 album Exile On Main Street. “Shake Your Hips” was also covered by Joan Osborne on her 2012 album Bring It On Home. It’s likely that The Moody Blues took their name from an instrumental track of his called “Moody Blues”.

His recordings were also widely covered in modern African-American circles, including by the late Gil Scott-Heron on his final album. Scott-Heron covered “I’ll Take Care of You” on his record I’m New Here. The song is also featured on the remix album featuring Jamie XX called We’re New Here.

Other notable covers of his songs include “I Got Love If You Want It” by The Kinks, “I’m the Face” by the Who (when they were still called The High Numbers), “I’m A King Bee” by The Rolling Stones, Muddy Waters, The Grrateful Dead, Pink Floyd, and The Doors, and “Don’t Start Crying Now” by Them with Van Morrison.

Will you squeeze me-ee? Come on, don’t tease me…

The photo on the front page was taken from an autogramm card. The copyright is unclear. If this is your pic. and you feel your copyright is being infringed, please get in touch with me and I will gladly remove it.