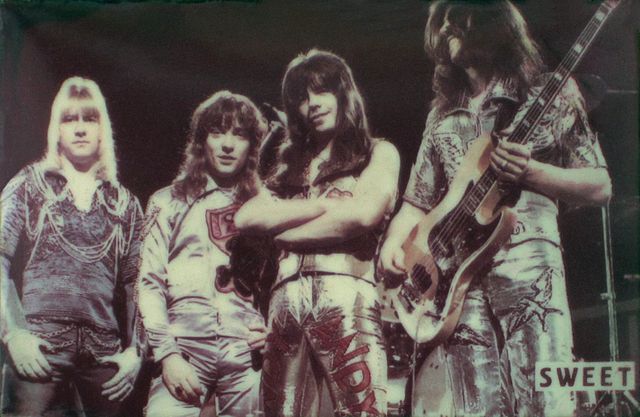 The band was formed in 1968 and achieved their first hit in 1971 after teaming up with songwriters Nicky Chin and Mike Chapman and record producer Phil Wainman. During 1971 and 1972, their musical style followed a marked progression from the Archies-like bubblegum style of “Funny Funny” to a Who-influenced hard rock style supplemented by a striking use of high-pitched backing vocals.

The band achieved notable success in the UK charts, with thirteen Top 20 hits during the 1970s alone, with “Block Buster” (1973) topping the chart, followed by three consecutive number two hits in “Hell Raiser” (1973), “The Ballroom Blitz” (1973) and “Teenage Rampage” (1974). The band turned to more Hard Rock style with their mid-career singles like 1974’s Turn It Down. Their first self-written and produced single “Fox on the Run” (1975) also reached number two on the UK charts. These results were topped in West Germany and other countries on the European mainland, where the band was very popular.

Sev and I would often talk about music and share the music that we loved. Since I was born in the 1960’s, he could turn me on to 1960’s music I never heard of at the time (we both LOVED The Kinks). I’m proud to say that I was able to turn him on to some of the music I loved that he’d never heard like Trip Shakespeare, The Sun Sawed in 1/2, Uncle Tupelo, Wilco, Son Volt, etc. We shared a love for singer-songwriters liked Lucinda Williams, Cat Stevens, and the like. Two kinds of music we both loved were 1960’s soul and 1970’s glam rock. Diana

Today’s song selection was released as a single in September 1972. It was the first song where the band was allowed to actually play on their records, as the record company didn’t let them play on their own records and sessions musicians played on their previous five RCA singles.

The song’s lyrics are inspired by Henry Longfellow’s Hiawatha poem from 1855. The story is about a Native American named Hiawatha. He doesn’t bother much about Minnehaha, but Minnehaha appears to be in love with Hiawatha and wants to make him her man.

Minnehaha took Hiawatha to the silver stream, and then she whispered words that he had never heard.

“She told him all about what he couldn’t live without…”