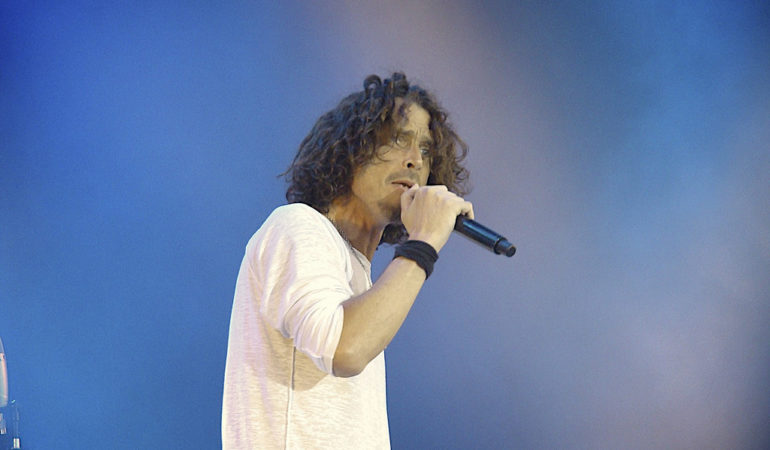 It’s really difficult for a person to create their own life and their own freedom. It’s going to become more and more difficult, and it’s going to create more and more disillusioned people who become dishonest and angry and are willing to f**k the next guy to get what they want. There’s so much stepping on the backs of other people in our profession. We’ve been so lucky that we’ve never had to do that. Part of it was because of our own tenacity, and part of it was because we were lucky.

So Chris Cornell, bandleader of Soundgarden, when asked about the above-named lyric presented on Mystery Lyrics, Wednesday 10th June 2015.

The choice for Wednesdays Mystery Lyrics was an American rock band formed in Seattle, Washington, in 1984 by singer and rhythm guitarist Chris Cornell, lead guitarist Kim Thayil, and bassist Hiro Yamamoto.Matt Cameron became the band’s full-time drummer in 1986, while bassist Ben Shepherd became a permanent replacement for Yamamoto in 1990.
They are named as one of the seminal bands in the creation of grunge, a style of alternative rock that developed in Seattle, and was one of a number of grunge bands signed to the record label Sub Pop. They were also the first grunge band to sign to a major label (A&M Records, in 1988), though the band did not achieve commercial success until they popularized the genre in the early 1990s with Seattle contemporaries Pearl Jam, Nirvana, and Alice in Chains.

No real mystery though for lovers of rock music; the featured band was Soundgarden, with what is arguably their most popular song “Black Hole Sun“. Apparently it is also one of their most misinterpreted, frequently being thought of as a positive song, whereas it is, according to Chris, rather a sad song

because the melody is really pretty, everyone thinks it’s almost chipper, which is ridiculous