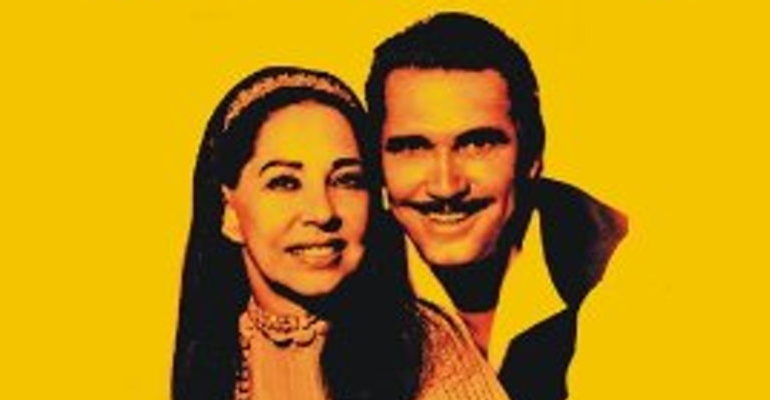 The Mystery Artists were an American husband and wife singing duo who reached the Top Ten in the UK and the US with the respective hits “Broken Wings” (1953) and the Mystery Song (1958).

She was born Doris Dabb in Elizabeth, New Jersey on 22 June 1913. She studied the piano from an early age, giving a piano recital at Carnegie Hall at the age of 13. She was performing at the Providence Biltmore Hotel in Rhode Island when she met the man whom she would marry. He was born in Baltimore,Maryland on 11 March 1914. He was a guitarist/vocalist also playing a gig at the Biltmore; the pair met as a result of the Biltmore accidentally booking them into the same suite. The couple married in 1941 and – subsequent to his stint in the army where he worked in an entertainment unit – they settled in Sherman Oaks California (as of 1947) with a gig at the Shadow Mountain Club in Palm Desert, California inaugurating a career on the California lounge circuit; they also eventually sang on their own radio show. The duo cut records including “Heavenly Heavenly” for RCA Victor in 1952: the single flopped but when the song which served as its B-side: “Broken Wings” became a hit in the UK for the Stargazers, their version had a UK release charting at #6 (the Stargazers’ version reached #1 while another version by Dickie Valentine reached #12).

In 1958, the couple were the resident act at the Chapman Park Hotel in Los Angeles; he recalls how that year “[composer] Wayne Shanklin stopped us one day and said, ‘I’ve got a great song for you.'” Art and Dotty cut a demo of the Mystery Song which was shopped to Era Records who released the demo track as a single. According to him: “The airplay was just sensational. This was just at the beginning of rock ‘n’ roll and the old-time DJs hated rock ‘n’ roll and they jumped on our song.” Their version reached #6 in April 1958.

They continued to record for Era and then for Dart Records but were unable to overcome the increasing dominance of radio airplay by rock ‘n’ roll.With The Mystery Song making the Melody Maker top 20 in the UK – a remake by the Manhattan Transfer would spend three weeks at #1 in 1977. The Mystery Song went Gold selling over a million copies

The success of The Mystery Song allowed them to pursue their nightclub career at a higher-profile level: they regularly played the Dunes in Las Vegas where they set a consecutive longevity record for playing one room (the Top o’ the Strip) for 68 weeks (reported in Billboard magazine 27 August 1966).In 1980 the duo relocated to Honolulu Hawaii where they opened their own club. She died in Los Angeles on 12 December 2000 at the age of 87, three months after being diagnosed with Alzheimer’s disease. He died on 10 October 2007 of congestive heart failure in Honolulu. He was 93.

Your Mystery Lyric is (or should have been)