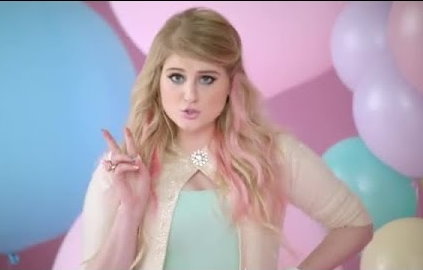 Todays song is another one of those earworm type songs that get stuck in my head. The song is a pop and doo wop song that contains lyrics of body positive themes which I also love. Our youth today both girls and guys are so stuck on what they SHOULD look like that according to peers the media, society, ah hell you know what I mean that they can’t be happy being themselves.

The song was positively received by critics who praised the catchy beat, lyrics, and message. The song has become a commercial success, peaking at number one on the Billboard Hot 100 becoming our artists first hit single on the chart. Internationally, it has topped the charts in Australia, Austria, Canada, Denmark, Germany, New Zealand, the Republic of Ireland and the United Kingdom, and peaked within the top ten of the charts in other countries.

You all probably know the song already but a little about the artist. She was (born December 22, 1993) is an American singer-songwriter, musician, and producer. She was born and raised in Nantucket, Massachusetts, She grew up with a musical family, and has been writing songs since she was 11 years old. Accoding to her she wrote this song because she herself struggled with the concept of self-acceptance. It was written from a real place so I’m glad that other people can relate to it.

Sorry Cheryl, your message is great, but this song is just gruesome 🙁