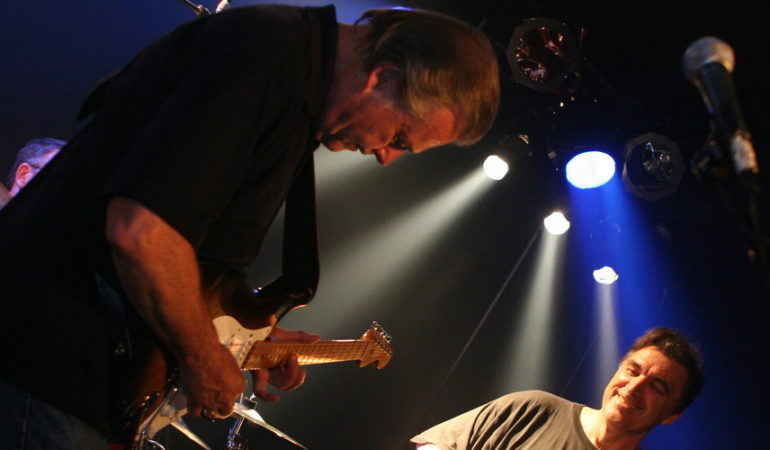 The Trashmen are a rock band formed in Minneapolis, Minnesota, in 1962. The group’s original lineup was Tony Andreason on lead guitar and vocals, Dal Winslow on guitar and vocals, Steve Wahrer on drums and vocals, and Bob Reed on bass guitar. The group played surf rock which included elements from garage rock.

The Trashmen’s biggest hit was 1963’s “Surfin’ Bird”, which reached No. 4 on the Billboard Hot 100 in the latter part of that year. The song was a combination of two R&B hits by The Rivingtons, “The Bird’s the Word” and “Papa-Oom-Mow-Mow”. The earliest pressings of the single credit the Trashmen as composers, but following a threat from The Rivingtons’ legal counsel, that group was subsequently credited as composers. The early single was credited solely to the drummer (and singer) – Steve Wahrer. The song was later re-recorded by artists including the Ramones, The Cramps, Silverchair, The Psychotic Petunias, Pee-Wee Herman, Equipe 84, and the thrash metal band Sodom. It has been used in filmmaking and television productions including, most notably, Stanley Kubrick’s Full Metal Jacket; Vince Vaughn’s “Fred Claus”; John Waters’ Pink Flamingos; Lyndall Hobbs’ Back to the Beach (where Pee-Wee Herman sang it); and the soundtrack to the video game Battlefield Vietnam.

More recently, the song was the subject of the Family Guy episode “I Dream of Jesus”, launching the song to No. 8 on the iTunes Top 10 Rock songs chart and No. 50 on the UK Singles Chart in 2009. Additionally, in 2010 a Facebook campaign was launched to get the song to No. 1 in the UK over Christmas; this was largely intended (as with Rage Against the Machine’s “Killing in the Name”, in 2009) as a protest against the takeover of the Christmas No. 1 spot by The X Factor winner’s song. The track debuted in the UK Top Ten for the first time, on 19 December, at No. 3.

The Trashmen went on to have other hit singles on the charts. In 1964, todays song “Bird Dance Beat” reached No. 30 on the Billboard in the United States, as well as becoming a top 10 hit in Canada, and a hit in Brazil. Five other Trashmen singles charted, and overall the group released fourteen singles. A four CD box set of their work was released on Sundazed.

The group disbanded in 1967 but reunited in the 1980s, playing together until the death of Steve Wahrer, who died of cancer in 1989. Tony Andreason’s brother Mark replaced Wahrer as drummer. Reed’s son Robin joined as a touring member in 2009 on drums filling in for Marc Andreason. (from Wikipedia)