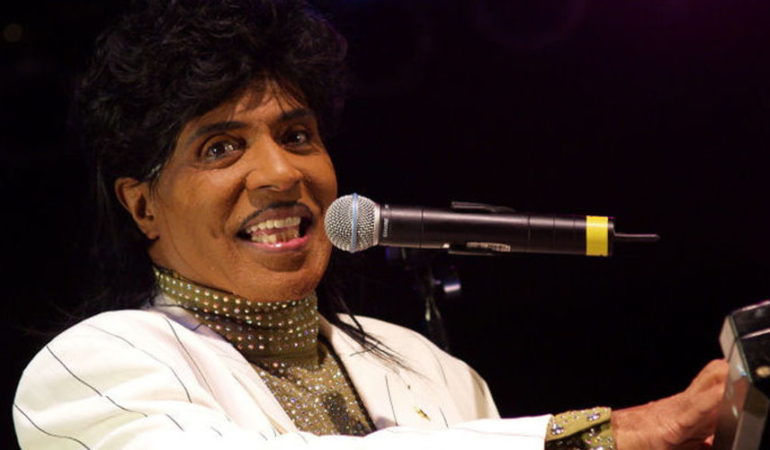 Little Richard claims to be the “architect of rock’n’roll”. Why? Because, as the man himself says, we must remember that he was recording as early as 1951, before Elvis. True enough, but it seems that Little Richard forgets that Big Joe Turner made his first record (“Roll ‘Em Pete”/”Goin’ Away Blues”) on December 30, 1938 for Vocalion with boogie piano master Pete Johnson, and that Bill Haley first stepped into a recording studio in 1944 with a group called The Downhomers. The song was called “We’re Recruiting,” recorded for the Vogue label. And, on December 10, 1949, Fats Domino recorded his debut record: “Detroit City Blues”/”The Fat Man” for Imperial.

[dropcap]B[/dropcap]ut getting back to Little Richard. Yes, he first recorded in 1951 for the RCA label, stepping into their studios on October 16th of that year (more appropriately, Little Richard recorded for RCA before Elvis.) He recorded a total of eight sides before moving over to Peacock Records, making his debut for that label on February 25, 1953, where he recorded another eight titles. During his stint with both labels, Little Richard’s sound was very much of the blues ballad/jump blues styles that were so popular in the 1940s. In fact, on several cuts during this early period of his career, Richard sounds very much like ’40s R&B shouter Roy Brown, the man who wrote and recorded the original version of “Good Rockin’ Tonight” [DeLuxe 1093] in 1947, which was later covered by Elvis, and “Rockin’ At Midnight” [DeLuxe 3212] in 1949, which was covered by The Honeydrippers in 1984.

“Keep A-Knockin'” was originally recorded in February 1928 by pianist Bob Call and vocalist James “Boodle It” Wiggins for the Paramount label [released as Paramount 12662, the original full title is “Keep A-Knockin’ An You Can’t Get In”]. The song was also covered at least three times for Decca Records: on April 18, 1935, blues singer/slide guitarist extraordinaire James “Kokomo” Arnold cut the tune as “Busy Bootin'” [Decca 7139]; on March 5, 1936, western swing pioneer Milton Brown and his band the Musical Brownies recorded the song [Decca 5251; sadly, on April 12, 1936, Milton Brown died due to injuries sustained in a car wreck], and finally, jump blues great Louis Jordan and his band the Tympani Five covered “Keep A-Knockin'” as “Keep A-Knockin’ (But You Can’t Come In)” [Decca 7609] on March 29, 1939. It is most likely through Jordan’s version that the tune reached Little Richard’s ears.

Interestingly, when Led Zeppelin was recording their fourth album in 1971, drummer John Bonham was goofing off, playing the intro to Little Richard’s version of “Keep A-Knockin'”. The rest of the band joined in but soon after the tape stopped. Fortunately, enough was captured to structure the track and the tune became LZ’s “Rock And Roll”.

Recommended listening for readers is “Keep A-Knockin'” by James “Boodle It” Wiggins, Kokomo Arnold (as “Busy Bootin'”), Milton Brown And His Musical Brownies, Louis Jordan and the Tympani Five, and Little Richard. As a bonus, compare the intro of Led Zeppelin’s “Rock And Roll” to Little Richard’s version of “Keep A-Knockin'”.