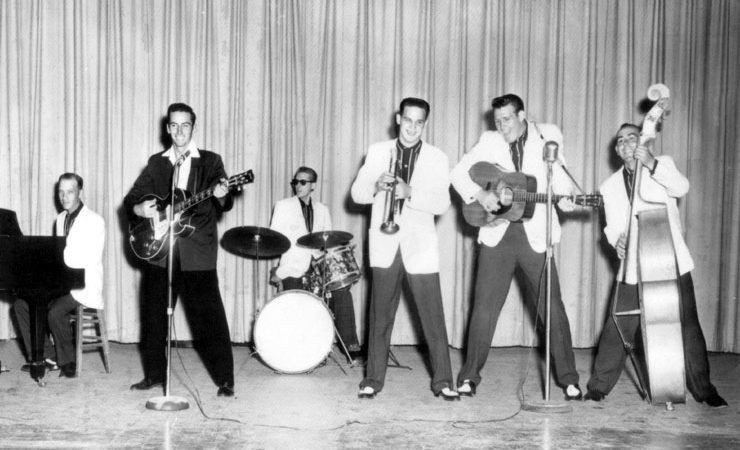 Think of Sun Records and who comes to mind? Elvis? Perhaps Jerry Lee Lewis? Carl Perkins? Roy Orbison? Johnny Cash? The truth is that, of all the musicians Sam Phillips recorded at Sun in ten short years, the number of obscure musicians far outweighs the handful that became household names. One of the lesser-known names to emerge from Sun, yet one who is just as good as those mentioned above, is a man named Sonny Burgess – a wild rockabilly singer, guitarist, and songwriter of great talent.

One online review I read stated that Sonny is a cross between jump blues master Louis Jordan and the Delmore Brothers, a hillbilly act consisting of Alton and Ramon Delmore whose close harmony singing style pre-dated that of the Everly Brothers by some twenty years, and in the 1940s were pioneers of hillbilly boogie, sounding very much like Sun Records-era Elvis – at least musically.

Today, Sonny Burgess is best remembered for his composition “Red Headed Woman,” recorded at his debut session on May 2, 1956. My personal favorite is “Sadie’s Back In Town” from 1960, a driving rocker complete with a hilarious Donald Duck voice-over supplied by drummer Raymond Thompson.

What set Sonny’s music apart from other rockabilly artists of the era was the fact that, during his first two recordings sessions, he recorded with a trumpet player named Jack Nance, who also doubled as a drummer (Russell Smith was the drummer when Nance’s trumpet was required).

In addition to “Red Headed Woman,” some of the other tracks from Sonny’s pen include “We Wanna Boogie,” “Daddy Blues,” “Gone,” “Truckin’ Down The Avenue”, and “Find My Baby For Me,” but if you were a musician in the 1950s, it was hard not to be affected by black music. Hell, even Pat Boone got in on the deal, if only to clean up rock ‘n’ roll’s “dirty” image. But don’t worry, I have no intention of going down the Pat Boone path – it’s too neat. What follows is a run through of some of the black music covered by Sonny Burgess, truly one of rock ‘n’ roll’s greatest and most original artists.

“My Bucket’s Got A Hole In It” was written by New Orleans jazz and blues pianist, publisher, composer, agent, record producer, and vocalist Clarence Williams. Williams had accompanied a number of female blues singers in the 1920s, most notably Bessie Smith in 1923. He also composed Bessie’s “Gulf Coast Blues,” “Baby, Won’t You Please Come Home” and “T’aint Nobody’s Bizness If I Do”. “My Bucket’s Got A Hole In It,” however, was recorded by countless artists, including Louis Armstrong, Lefty Frizzell, Bill Haley, Ricky Nelson, Mr. Acker Bilk, Johnny Carroll, Dwight Yoakum, and, included on the CD Good Rockin’ Tonight – The Legacy Of Sun Records, Led Zeppelin’s Jimmy Page and Robert Plant. Sonny Burgess recorded his version on August 15, 1957, for Sun, most likely learning the tune through Hank Williams’ 1950 version, a #2 smash on the C&W charts that year.

“My Babe” comes from the pen of Willie Dixon. Well, at least lyrically. Recorded by Sonny at the same session that produced “My Bucket’s Got A Hole In It,” the song has its roots in black gospel, recorded in early September 1922, by the Florida Normal and Industrial Institute Quartet as “Dis Train” (“Dis train don’t carry no liars, dis train”). On January 10, 1939, gospel singer and guitar wizard Sister Rosetta Tharpe recorded the song as “This Train” for Decca Records. In August 1943, with the recording ban in full swing thanks to the war, she performed the song in Hollywood for a live broadcast backed by Louis Jordan and The Tympani Five for the Armed Forces Radio Service (AFRS), which served as one form of entertainment for the men and women overseas. The performance was later issued to military bases and short-wave radio stations in the U.S. and overseas as Jubilee 41: a 15-inch, 33 rpm “Jubilee” transcription. She recorded the song two more times in July 1947, where it was recorded for Downbeat and made a second time for Decca. The song was first recorded under the title “My Babe” seven and a half years later, on January 25, 1955, by Chicago blues harmonica genius Little Walter Jacobs (“My babe don’t stand no cheatin’, my babe”). Little Walter’s version features Willie Dixon himself on bass and, on guitar, Robert Jr. Lockwood, stepson of 1930s Delta blues legend Robert Johnson. In the hands of Little Walter, the song became a standard in both the blues and pop fields, covered by Bo Diddley, the Coasters, the Animals, Ricky Nelson, the Everly Brothers, the Fabulous Thunderbirds, Elvis Presley, Ike and Tina Turner, and the Tornados, just to name a few.

One of the classic blues recordings to come out of Sun Records was “Feelin’ Good” by Little Junior’s Blue Flames, released in 1953 as Sun single 187. Partly based on John Lee Hooker’s 1948 smash “Boogie Chillen,” “Feelin’ Good” features guitarist Floyd Murphy. It is Murphy’s tasty half blues/half country guitar licks that Sun owner Sam Phillips played for his rockabilly guitarists and instructed them to sound like. In 1957 or 1958, Sonny and his band recorded “Feelin’ Good,” giving the song a stronger backbeat that matched the excitement of the Blue Flames’ more laid back original.

Perhaps recorded at the same session that produced “Feelin’ Good” (the discography lists ten titles as if they were recorded in one session, yet the heading reads “Unknown Dates: 1957-1958”), Sonny tackled “So Glad You’re Mine,” credited to Arthur “Big Boy” Crudup, who recorded the tune on February 22, 1946, for Bluebird with Armond Jackson on the drum stool. Two takes as recorded by Sonny exist, one intro with piano, the other with guitar. Clearly the latter is the more exciting of the two, with Sonny’s enthusiastic shouts of “Oooo, whee!” and “Yeah!” sprinkled over a driving tempo complete with one of Sonny’s hottest guitar solos. The band is really inspired on this take.

During this same period, Sonny recorded “One Night” as originally recorded by New Orleans singer/guitarist Smiley Lewis on October 25, 1955, for Imperial Records (Lewis sang, “One night of sin… is what I’m now paying for”). The song, “cleaned up” yet still suggestive, was served to the public most famously when recorded by Elvis Presley in February 1957 (“One night with you… is what I’m now prayin’ for”). It should be noted that a month earlier, in January of that year, Elvis recorded the song with its original “sin” lyric. Thankfully, Sonny also sang the song the way it was meant to be heard.

Sonny Burgess recorded two more tracks originally put down for posterity by Smiley Lewis: “Ain’t Gonna Do It” was recorded in New Orleans in October 1952. Like most of Smiley Lewis’ recordings, it was written or co-written by bandleader, trumpeter, songwriter, arranger Dave Barthlomew, who is also responsible for the recordings of Fats Domino. Like “So Glad You’re Mine,” two versions exist of Sonny performing “Ain’t Gonna Do It,” the first from 1956/1957 (unfortunately for collectors, Sam Phillips was not one who took session details to heart) while the second is from early 1957.
“Please Listen To Me” was first recorded by Smiley Lewis for Imperial on March 20, 1956. Sonny’s Sun version was recorded a year later. An overdub session was held on May 13, 1957, in which Sonny’s versions of “Ain’t Gonna Do It” and “Please Listen To Me” received backing vocals.

“Fannie Brown” is credited to R&B shouter Roy Brown, whose version was released as DeLuxe 1128 as “Miss Fanny Brown” in December 1947 as the flipside of a tune called “Mighty Mighty Man”. All is true – except I don’t know if “Fannie Brown” and “Miss Fanny Brown” are two versions of the same song. According to Nick Tosches’ incredible book Unsung Heroes Of Rock ‘n’ Roll: The Birth Of Rock In The Wild Years Before Elvis, the only other “Fanny Brown” titles listed in Roy Brown’s discography are “Miss Fanny Brown Returns” (DeLuxe 1189; September 194 and “Fanny Brown Got Married” (King 4761; December 1954). Therefore, since we don’t have Roy Brown’s “Miss Fanny Brown” in order to compare it to Sonny Burgess’ “Fannie Brown,” I’m going to conclude that they are the same song with slightly different titles – but I could, of course, be wrong. If so, I will make a note of correction in a future article. All that matters for now is that you readers know that Sonny got the tune from Roy Brown.

The Drifters, one of the greatest vocal groups of all-time, had countless hits beginning in 1953, with sixteen Top 40 hits between 1959 and 1964. The songs, all recorded for Atlantic Records, featured several lead vocalists who passed through the ranks of the great group throughout the years, including Ben E. King. The first, and arguably the greatest, of their lead singers, however, was a man named Clyde McPhatter, formerly of Billy Ward and the Dominoes (on December 30, 1950, the Dominoes, featuring McPhatter, recorded “Sixty Minute Man” for Federal, a song about “Lovin’ Dan” who could please a woman for an hour without missing a beat. “Sixty Minute Man” became a #1 R&B smash for fourteen weeks in 1951, and even reached #17 on the pop charts, a significant accomplishment considering it was the era of harmless pop singers such as Patti Page and Rosemary Clooney). In 1953, upon McPhatter’s departure from the Dominoes to form the Drifters, Ward hired Clyde’s replacement: the great Jackie Wilson.

Considering the fact that the Drifters were popular from 1953 until well into the 1960s, McPhatter’s stay with the group was incredibly short, lasting only from June 1953 to October 1954, before being drafted and embarking on a successful solo career upon his release. His two biggest hits were “A Lover’s Question” (1959) and “Lover Please” (1962).

A song entitled “What’Cha Gonna Do,” written by Atlantic Records co-founder Ahmet Ertegun, who, it should be noted, gleaned the song from a spiritual by gospel group the Radio Four, was recorded by the Drifters on three separate occasions: at their debut session, held on June 28, 1953; their second session on August 9th of that year, and again at their fourth session, held on February 4, 1954. They finally got it right on the third attempt as it became a #2 R&B smash.

Two versions of “What’Cha Gonna Do” as recorded by Sonny Burgess were included on the 2-CD compilation The Classic Recordings: 1956-1959, released in 1991 by Bear Family, though neither were released at the time: the first, recorded in Memphis possibly on August 14, 1957; the second sometime in 1957 or 1958. Both takes are fine, with the only chief difference being that the first features a nicely-picked acoustic guitar throughout while the second does not.

Sonny Burgess promoted black music in a small yet significant way. Small because Sonny is a fish in an endless sea of white musicians inspired by their black counterparts. Significant because his sound was exciting, made during a highly creative period in history, and recorded under the right conditions, as Sun Records valued feeling over technical expertise and didn’t have a clock in the studio, therefore eliminating pressure on the musicians to finish within a certain time frame. Do yourselves a favor and check out Sonny’s music and the music that inspired him. You’ll be glad you did.