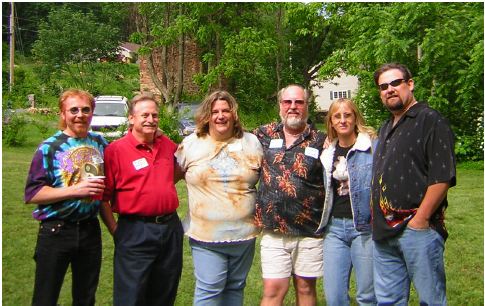 Amongst the goodies in Edna’s Yearbook, there was a history of the legendary Rocn60s BBQ – the mother of all oldie get-togethers. Unfortunately I haven’t been able to get there, and as Steve (rightly) reckons he has done his bit, I probably never will either… For those who, like me, didn’t have the chance to enjoy this event, and for others that did… here is the history as published by Edna and told by Rocn60s back in 2003

The RocNBBQ started back in 1997 when a few of us SoCal friends wanted a little get together to celebrate the end of summer. After racking our brains trying to  figure out where to have this party, I suggested we have it at our home, and the RocNBBQ was started.

the original group consisted of PGDJG (Patti), OneLucyFan (Mary), her husband Tom, Slowhand90 (Rudi), and me, Rocn60s, along with my wife Karen. And a special guest from Memphis, MSchoBlue (Mike) and his wife Lori. We had so much fun that we decided to make this an annual event.

In 1998 I teamed up with my neighbour down the street, TeddiLee, and the RocNTeddiBBQ was born. We had 16 AOL’ers, along with 5 spouses and children. Again, the potluck BBQ was a smashing success!! We started at Teddi’s house for hors d’oeuvres and supper, then over to my house for dessert, music and chat. We had so m uch food.. and the company was fantastic. We had guests fly in from Colorado, Mississippi, Texas, as well as Norhtern and Southern California.

In 1999 Teddi and I once again teamed up for the RocNTeddiBBQ’99 and took it to new heights.. we went from 6 guests in 1997 to over 35 this year, representing nine states, and a multitude of new faces, as we combined the ol’ trivia room gang with the Mystery Lyrics and Music Oldies groups. I believe in all the fun we forgot about taking a group picture, but these pics from the RocNBBQ2000 will give you an idea of the crowd.

With the new millennium, Teddi decided to take a respite from hosting, thus returning the BBQ full circle back to the RocNBBQ.

So, welcome one and all.. please make yourselves at home.. enjoy the food, the company and the ambiance of the RocNBBQ2000 :-))